Seeking to Entertain, Possibly to Educate

Travels With Myself – A Journal of Discovery and Transition

Travels With Myself is an account of one man’s journey through change and transition – grief, despair and frantic mania, finally to getting on with life. Doug lets us know that he considered the questions of life’s purpose throughout his life, but they didn’t take on real meaning until he was forced to deal with the death of his life-long companion to cancer, and then the loss of his new love to her life choices; then, hair on fire, traveling half way around the world to find himself. Intertwined with Doug’s Odyssey we also follow Doug’s journey to find a new professional identity.

BUY NOW
Wonderful writing. I wanted to read this piece several times because there is so much in it. It’s like peeling back the layers of an onion, I keep finding another perfect form/relationship to examine and explore; each layer is richer than the previous one. I am reminded of analysing the characters in plays by Anton Chekov. Thank you for helping me with my own journey from loss to purpose.
David Bradley, Whitby U.K.
Doug, I am really impressed with this initiative. The writing is superb and truly open and honest. You have lots to share and write well and with passion. Your life-long journey to become a writer and then finally emerging from grief to a new identity is truly inspiring. On a personal note, I did enjoy and chuckled about the recollection of our director’s tutoring on writing skills…..we didn’t realize at the time how much his attention would benefit us in our careers.
BONNIE ROBINSON, Ottawa
While witnessing my father facing death Doug’s blog posts on grief arrived in my inbox. I shared those posts with all of my family. I noted at the time this blog has potential of becoming a best selling book, and now, here it is. Doug has an insightful perspective on life and death; he’s incredibly personable and candid. There’s so much to learn from this book about life and coping with the loss of a loved one – mourning, grief, depression and all of the multitude of challenges. I encourage everyone to read this book.
BARRY McARTHUR, Toronto
I Ioved this piece of writing. I couldn’t read it fast enough. Doug wrote from the heart in simple to understand language – no dictionary to slow the reader down! It touched my heart and it brought me closer to what he went through in dealing with love and loss. Thank you.
WAYNE DUNHAM, Kitchener, Ontario
Thank you for sharing another installment of your thought-full blog. You really captured a delicate balance between light humour and the heaviness of facing mortality. I felt like I was riding along with you, from the thrill of the highest praise to the spiral into the fog of despair. The last words of this entry reflect the discomfort of the emotion; it is obvious that you were mourning, of course you were, but the way you write it elicits the image that your throat is tightened and you need some time alone to process before you can say any more.
B. DIKLAND, Cantley, Quebec

Amitié came from Corsica to Canada to escape poverty and start a new life, and eventually entered the lives of Karla and David. Strong bonds were formed amongst all three until life's challenges changed everything. This is a story about love, and loss and grief. And about choices, though the reasons for those choices may not be so clear, not even to themselves.

Sequel to The Maxim Chronicles, A Year with a Champion Poodle, this book continues the story of the Jordan family and their beloved dogs who gave so much richness to their lives. Follow Hallelujah, the beautiful white bitch, as she herself goes to ‘The Show’, wins armfuls of ribbons and prizes, then retires to making puppies. The journey repeats as Halle’s best black bitch, Valmara’s Highland Fling Bonnie Doon, also wins Best Puppy in Show, and thrills her family all over again. You’ll learn more than you ever wanted to know about Poodles, grooming, breeding, obedience training, encounters with vermin, and vets. But this is not just a book about dogs. It is also about people, families, and relationships, laced with irony and humour. Interspersed in all this dog lore the author explores ideas in philosophy, religion, consciousness and life. Anyone who has ever owned a dog knows already the truth of Will Rogers declaration: ‘If there are no dogs in heaven, I don’t want to go there.’

BUY NOW
“I had to sit quietly with my thoughts prior to writing this review. The Hallelujah Chorus, while informative on a lot of topics besides Poodles, left me with a deeper appreciation for the written word. Author, Doug Jordan, invites you on a journey with him to such an extent, the reader feels that they too are in the story. So well done are the descriptive passages of what the “The Chorus” of characters are like and get up to, you feel you are living the moments and years alongside Mr. Jordan and his family. Moments of joy and sadness, awe, humour and lastly, love. If there is one undercurrent of themes in this memoir it is that of love: Love of family, friends and of course, love for those dogs. This is not a story solely for Poodle lovers, or even dog lovers. No, it is a novel with heart. And all of us could benefit from stories like these. A solid 5 stars.”
Shannon Christner

A Year With a Champion Poodle A story about a year in the life of a dog and his various families. Maxim was a Standard Poodle who lived for a time in Israel, only to return to Ottawa as a ‘teenager’ and learn to accept a whole new family. A memoir full of humour and information as Max and his family enter the world of conformation shows, and finally becoming a champion, in more ways than one. Clearly narrative therapy, it may also prove therapeutic to the reader as well.

BUY NOW
“As a professional and a friend Doug Jordan is a rational thinker, and a great conversationalist. Reading the Maxim Chronicles, one discovers the quality of his storytelling, with suspense, drama, and humour too. The book’s short chapters make it easy to pick up for quick reads – though I ended up reading it in one sitting! I am not a dog owner and wasn’t sure I would relate to a book about “a year with a Champion Poodle” at the outset. Doug’s retelling of his experiences with Maxim shows how animals help us connect – with them at first, and through them to other people in our lives, and most intimately, with our secret selves. When is the sequel?”
Amazon Reader

The Dynamics of Management

Management is the art of influencing others to achieve organization goals, and in the bargain, achieve the manager’s, and the employee’s, personal goals. As the book makes clear, management is not for everybody, but if a career in management looks like the path you want to take to achieve life satisfaction then this book may help you understand what management – and leadership – really is, and what it takes to master the dynamics of influencing others.

BUY NOW
“Anybody can, indeed many do, accumulate the knowledge of management. It doesn’t make them good managers! This book is about what you do with that knowledge. It is both well written and pragmatic in its approach. It is also thought provoking. I’m not sure that those individuals, who assume they are now effective managers (because they have a business degree/MBA), will learn much. But for those who who have an open mind and a desire to continue their development, however experienced, this is a must read!”
Amazon Reader
“Doug captures both the technical elements of management while equally treating the human side of the equation. Great read, but even better as a continuous reference point”
John Sicard, President, Kinaxis Corporation 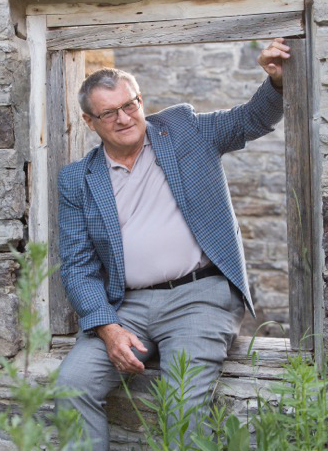 Doug Jordan is the Principal in his own firm, AFS Consulting, in Ottawa, Canada, and owner and contributor to AFS Publishing. He spent the first twenty years of his career in industry in Human Resources Management, and the next twenty as an Executive Coach and Consultant. He has written three books on career and management effectiveness, and dozens of blogs on management, and life, which you can find at www.afsconsulting.ca.

Doug used to describe himself as a consultant/coach by day and author by night. But now the roles have been somewhat reversed.

Travels With Myself is Doug Jordan’s seventh book, another memoir. His first foray into ‘non-professional’ writing was The Maxim Chronicles, followed by the sequel, The Hallelujah Chorus, both memoirs about the family poodles. He is working on his next novel, The Treasure of Stella Bay and there are other books in the pipeline or in draft on his hard drive. We hope all these serve to educate as well as entertain.

Doug has a degree in Arts and an MBA from Queen’s University, but his education has never ended.

CHECK OUT OUR BLOGS

What our readers think

“The Maxim Chronicles charmed me from the very moment I began reading it. I fell in love with this amazing dog and found the funny and insightful writing to keep me engaged. I would recommend this to anyone who loves dogs and would benefit from Doug’s deep insights about the psychology of a dog and the love we have for them…oh and how it changes US!”

Self-publishing is not quite as easy as those printing houses make it out to be.

I am Doug Jordan, owner and publisher of AFS Publishing. I learned a lot in publishing my first book, The Dynamics of Management, and then learned a whole lot more when I re-published it as an e-Pub! Publishing The Maxim Chronicles was a slight improvement, print and e-Pub versions. I founded AFS Publishing to help others in this perilous journey.

I use lulu.com for rather obscure patriotic reasons. I’m sure other service providers are probably just as ‘helpful’. (Okay, since you asked: the founder/owner off lulu.com is Bob Young, a Hamilton Ontario boy who made a gazillion dollars when he sold Red Hat Software; he also owns The Hamilton Tiger-Cats and I am a devout CFL fan – Go RedBlacks!)

The mechanics of publishing are one thing but finding the inspiration to write is another. Having the discipline and stamina to edit, and edit and edit is another thing again. And finally, having the courage to face the public and publish is quite another thing again. To write, and to publish, requires a balance of hubris and humility. Then follows the even more demanding task of promoting your book.

Let me know if you could use a little help, and encouragement.

Get notified when there is a new blog post and receive other updates from AFS Publishing.